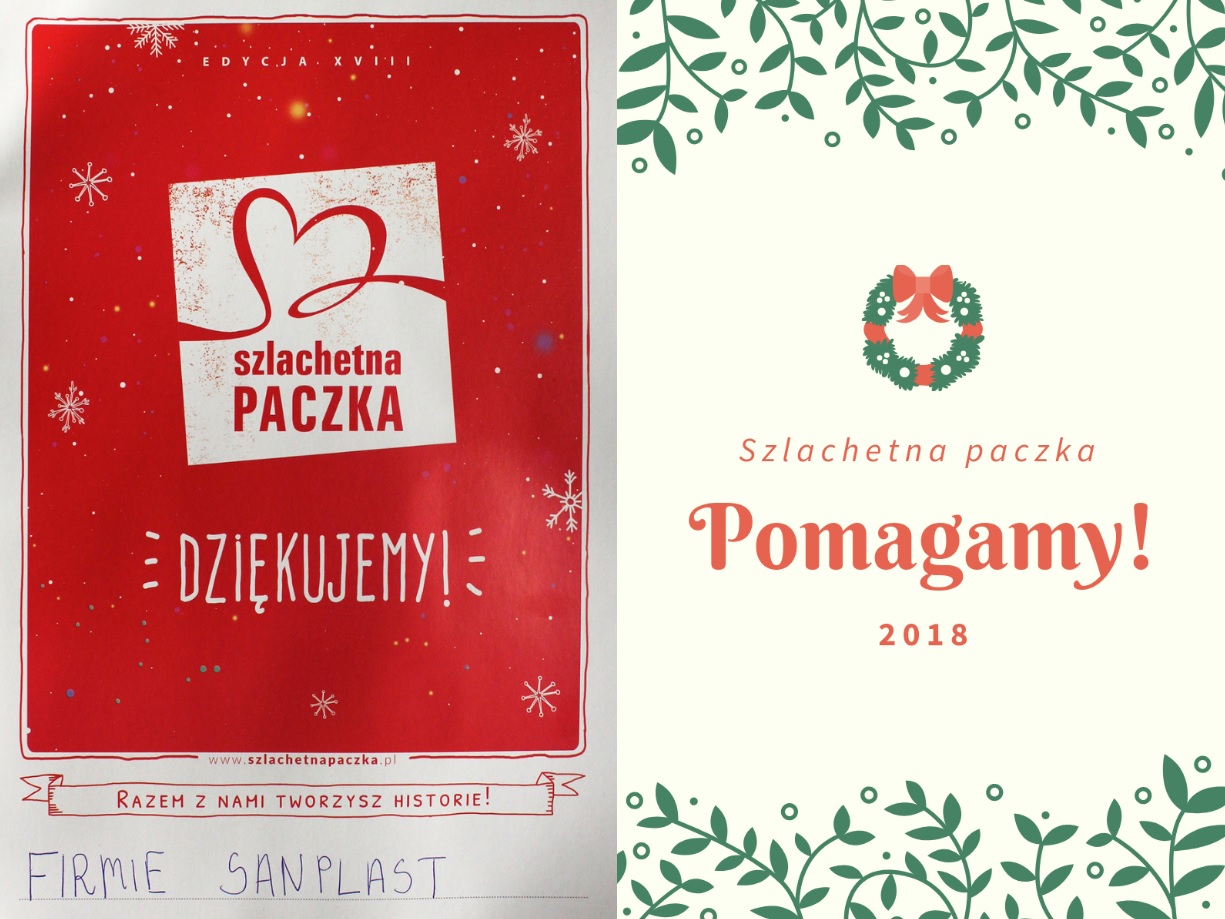 Christmas is not only a time for meeting family, singing carols and feasting at a richly set table. It is also a time during which we want to share with others what we have, and also pay more attention to people in a difficult financial situation. "Szlachetna Paczka" is an initiative that for 17 years connects Polish people who want to help the needy just from the need of the heart.

This year SANPLAST S.A. has once again joined the "Szlachetna paczka". It is an action in which help is directed to people particularly affected by fate, struggling with adversities. The content of "Szlachetna paczka" is not a set of useless gifts, but real gifts that make life easier for people affected by poorness.

Helping others has always been close to the founders of SANPLAST S.A. Almost from the very beginning of the company's existence they supported not only goog cause, but also various cultural, sports and talented youth initiatives. Direct help to another person is also the motto of "Szlachetna Paczka" - an action that despite thousands of people involved in the project, does not go to anonymous recipients, but to people with real needs. Taking part in "Szlachetna Paczka" you helps a specific family by fulfilling their requests for basic necessities, such as clothes, food, cleaning supplies and school supplies.

There is many people in needs

The idea of helping people in needs is something natural for us, because for many years we have been involved in various charity campaigns. We try to help every day, but Christmas is a special time in which we pay even more attention to the needs of others. "Szlachetna Paczka" is an action that helps people who find themselves in a difficult life situation. The fact that we know exactly for who the package is prepared it makes us feel the real strength of help and we can even more enjoy the improvement of the fate of the recipient

"Szlachetna Paczka" helps needy Polish people since 2001. Thanks to the support of such companies as SANPLAST S.A., as well as thousands of private persons from all over the Poland, just last year, 20.073 packages went to help those in need.

Bathroom windows have become an arrangement hit of recent seasons and although they are a slightly non-standard solution, they are gaining masses of supporters. Why is it worth to choose a bathroom with a view? Is it just a fashion for one or two seasons or a solution for years?

The New York style may seem extravagant and unusual at first, but the trend straight from Manhattan becomes a confidant of modern solutions upon closer acquaintance. The uniqueness and unconventional nature of this style catches the eye of more than one person.

It would seem that a free-standing bathtub is a temporary trend and sooner or later it can be replaced by the market. It turns out, however, that it is timeless. This variant of bathtubs is often used in modern bathroom arrangements, sheep apartments or hotels.

A way for a modern bathroom interior in a small bathroom? And also original and unconventional, but functional? Have a look into our advise - simple design in three different editions! Have a look how the shower enclosure can change the interior design and climate!